Case Study: Earthborn replaces limewash inside and out at medieval hall house

A listed north Devon home described by Pevsner as a late medieval hall house has been given a contemporary look thanks to its redecoration with Earthborn paints.

The Grade 2* listed property was built around 1550 and is notable for its 17th Century plasterwork. It was lovingly restored over 10 years by its previous owners, who limewashed it inside and out. But when it came to repainting after three years in the house, current owner Simon Clarke decided to investigate alternative options.

He said: “The house is built of Devon cob, a clay soil based building material and the walls are lime plastered internally. It’s important that these old, natural walls can breathe, to prevent damage caused by moisture build up. So I needed breathable paints inside and out, but I didn’t want to use limewash again. Although it has a wonderful patina, I wanted to create a more contemporary feel and use a wider palette of colours. I also wanted to avoid the all too regular repainting that’s needed with limewash.”

Simon’s research drew him to Earthborn paints, which can be used straight over existing limewash. He selected Earthborn’s Ecopro Silicate Masonry system for the external walls and Claypaint for internal walls. 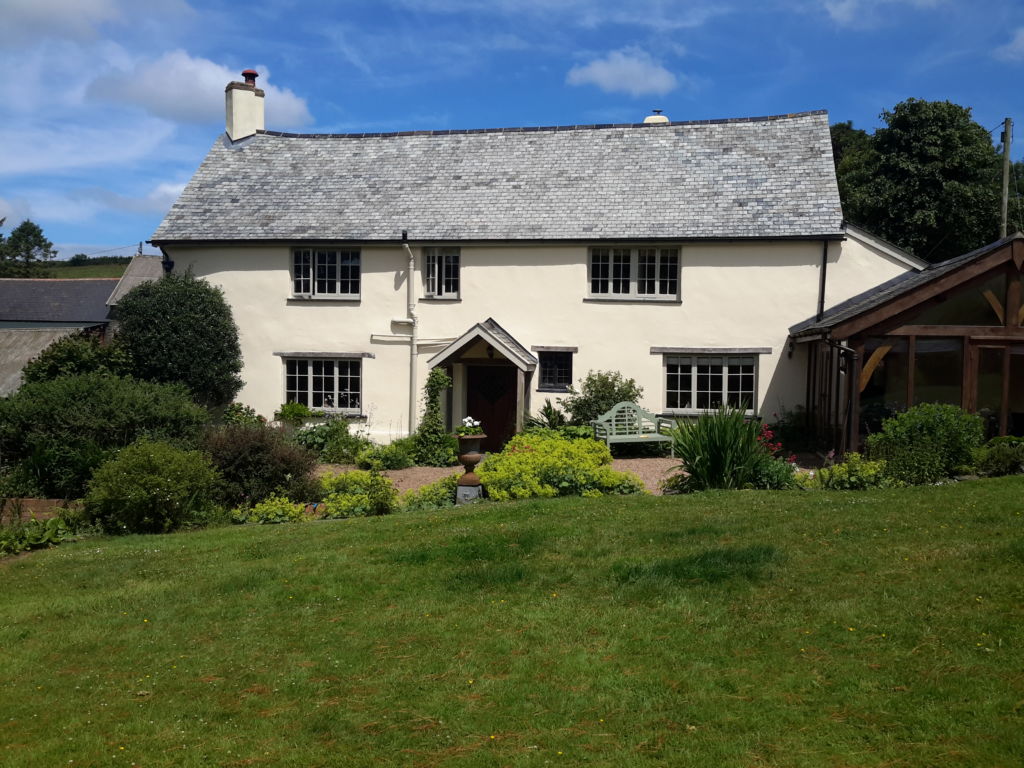 The external walls of this late medieval hall house have been painted with Earthborn Silicate Masonry Paint in Sandstone to provide a long lasting alternative to limewash.

The Ecopro Silicate Masonry System offers a durable, easy to use alternative to limewash and conventional masonry paints. It comprises a primer and paint, which form a chemical bond with the underlying mineral substrate. The result is a very hard wearing, water and weather resistant barrier. It offers the same high levels of breathability as limewash but is easier to use and lasts much longer.

Useful for any porous mineral surface such as stone, brick, concrete, render or cob, Ecopro Silicate Masonry Paint gives a classic matt finish that will not yellow with time. It even helps prevent algae growth and mould. Simon chose the Sandstone shade, which sets off the cob walls perfectly against the slate roof.

Internally, the house features ornate plasterwork, including a particularly intricate frieze in one of the bedrooms. Simon said: “I was anxious to preserve the delicate plasterwork and chose Earthborn’s Claypaint because it provides a kinder finish than other paints, particularly those which are acrylic based.” 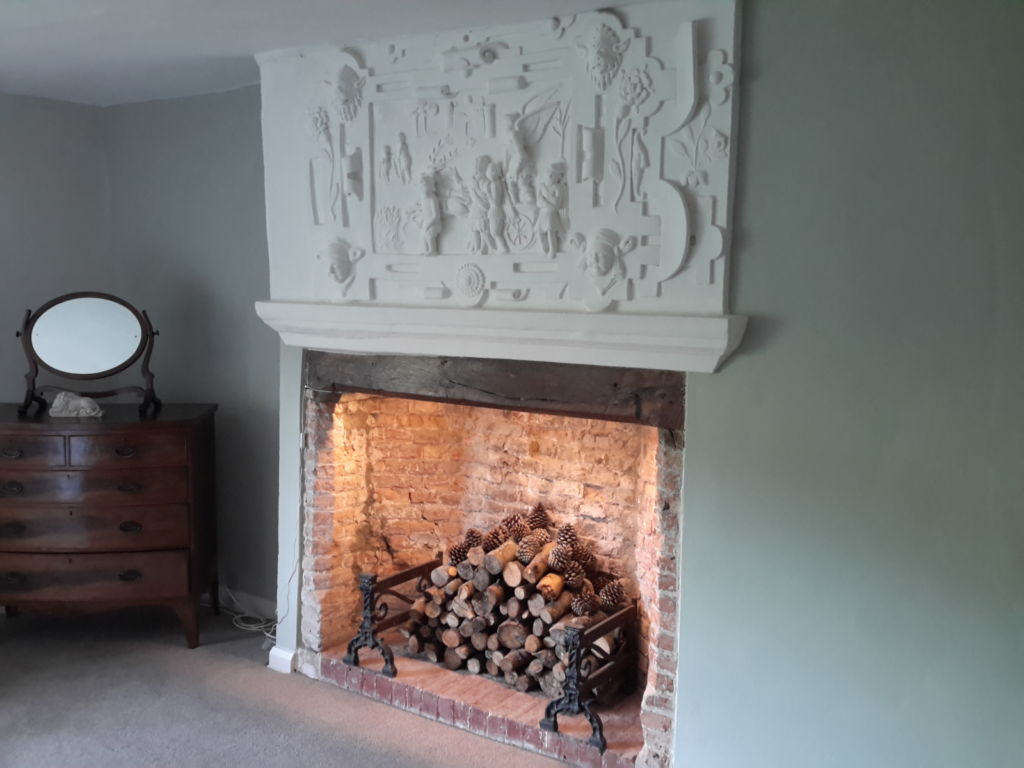 Dating from 1610, this intricate frieze is highlighted in white Claypaint against mellow green Gregory’s Den walls.

Claypaint is a unique, clay based emulsion. Its advanced technology maximises the natural properties of clay to create a high performance, highly breathable paint that covers exceptionally well and gives a distinctive, ultra matt finish.

Being free of oils and acrylics, Claypaint is virtually VOC free and does not give off any toxic emissions. That means it is safer for the health of building occupants as well as the environment. Its eco credentials include the stringent EU Ecolabel.

Simon added: “I brushed the Claypaint directly over the limewash; it just needed two coats to achieve excellent coverage. I think it is cost effective because other paints often need several applications while Claypaint needs only two. I used a combination of four colours: Gregory’s Den, Hopscotch, Vanilla and White.” 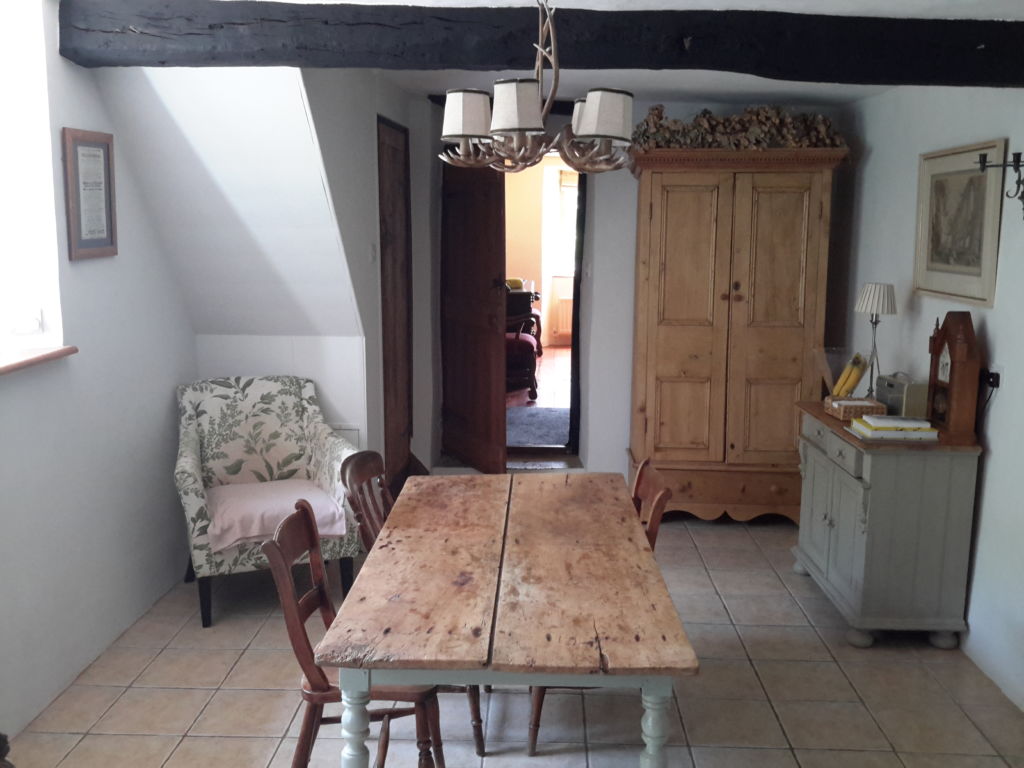 The warm off-white of Hopscotch Claypaint creates a calm ambience in the kitchen’s dining area.

Claypaint is available in Earthborn’s signature palette of 72 shades. Bespoke colours can be developed through the nationwide network of Earthborn stockists such as Brewers which supplied this project.